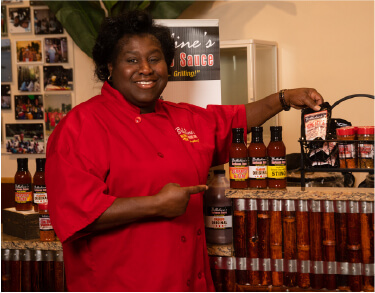 As part of a large family growing up on the east-side of Detroit, Miriam Brown loved watching her mother cook. “I always knew it would be good, and I wanted to eat,” reflected Miriam, founder of Belledine’s Barbecue Sauce and Seasonings. “When we had groceries, my mom would cook all day. There were ten of us and a lot of times we ran short. I made sure I stayed in the kitchen on those market days.”

Home cooking is the driving force behind Belledine’s – a reflection on those happy times with family, enjoying the special seasonings that made dinner so memorable.  With the sudden loss of her mother, Miriam turned to the comfort of those memories and created sauces and rubs that reminded her of her childhood. “I never knew I had the ability to cook until after my mother’s death. It was buried deep inside of me and as I recreated dishes – I really started to enjoy creating different flavors.”

Miriam became active in the church community and began to volunteer for barbecues. “I had been working on the sauce for a few years and started using it on a larger scale at church picnics,” stated Miriam. “People really enjoyed it and encouraged me to bottle it up and sell it.”

This appealed to Miriam’s entrepreneurial spirit and the idea for Belledine’s was born; named as a tribute to Miriam’s grandmother Belle and mother Nodine. There was only one problem, Miriam never had a recipe for the sauce, she had always just relied upon her memories of watching her mother and never measured out anything. After several times of measuring and recording amounts, the perfect recipe was approved and tested. Belledine’s Original sauce was created.

“It was a lot of hard work taking it out of a home kitchen to a commercial kitchen,” reflected Miriam. “I knew I had to do things in bulk but didn’t want to lose the comfort or flavor of home-cooking.”

Miriam has since crafted three other flavors: Honey Bee with a Sting, Surprise and Fire, and Heat Seekers Delight. She has also expanded her business with seasonings and rubs – creating over 20 different flavors to accent any meal. “The rubs have grown in popularity,” explained Miriam. “We have even competed and won several chili cook-offs with certain with our chili recipe which includes are chili seasoning and our not so secret ingredient of Honey Bee with a Sting BBQ Sauce.”

With the creation of the product, Miriam started to take them into local Farmers Markets and specialty stores. When her first show sold out in the middle of a Michigan winter – Miriam was convinced she had something great. “I know that this was all God,” explained Miriam. “The ideas, the money to start the business – I could have never done this on my own. He gives every person a unique gift and I was just able to find that gift within myself. I believe it will be the number one sauce in the country.”

Miriam uses part of her profits to invest into Detroit youth through “Youth with A Vision” organization.

 5/5
"Made a quick stop at the Sterling Heights farmers market at Dodge Park and not only had the pleasure of meeting this lady, but also tasting the sauce! I’d have …to say it’s a unique sauce, and I can’t really describe it but I wanted to show my support, it’s delicious! I think you’ve really got something different here! Good luck with everything, and I’m sure I’ll stop in again to get some sauce once I run out!"
Corey D.

Ingredients We Are Proud Of

We take pride in offering only the highest level of quality ingredients. We carefully select and source every resource to ensure the best tasting experience for all of our customers.

Products Made With Quality, Authenticity, and Integrity.

Belledine’s Barbecue Sauce & Seasonings is proudly made in Detroit, MI. Our products are Gluten-Free, All Natural, and Vegetarian Friendly.